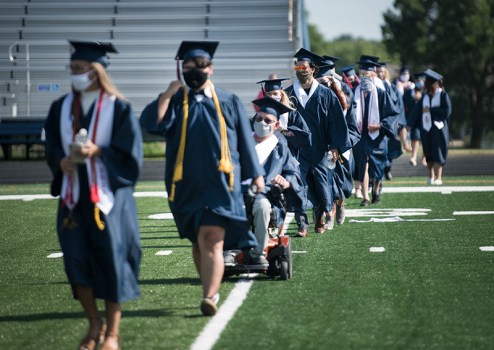 Albert Lea High School students take the field at the start of the first of two commencement ceremonies in 2020 at Hammer Complex. Colleen Harrison/Albert Lea Tribune 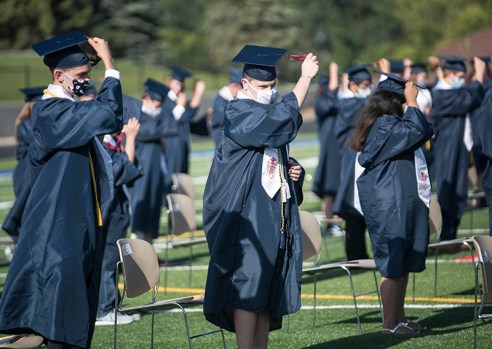 Students move their tassels to the other side of their caps after receiving their diplomas during the first graduation ceremony in 2020. Colleen Harrison/Albert Lea Tribune 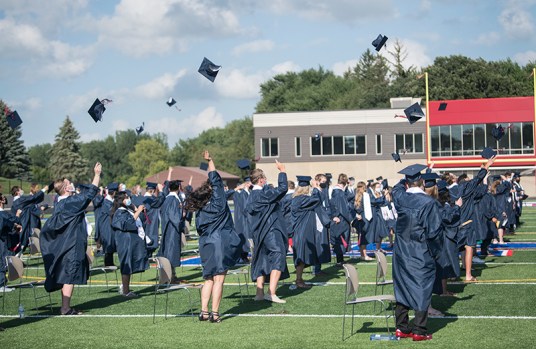 Caps are thrown into the air after Friday's first commencement ceremony comes to a close. - Colleen Harrison/Albert Lea Tribune 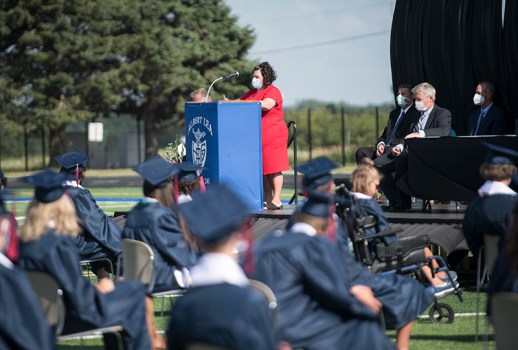 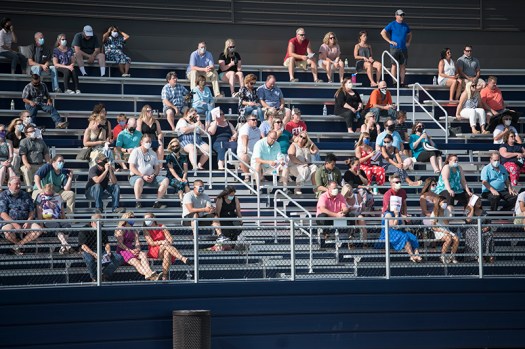 Graduates were each allowed to invite two guests to Friday's ceremonies due to COVID-19 pandemic restrictions in place. - Colleen Harrison/Albert Lea Tribune 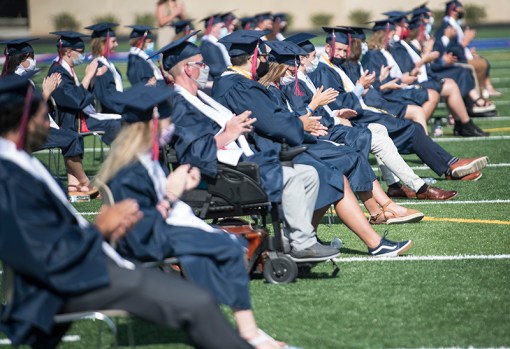 Due to the coronavirus pandemic, Albert Lea's graduation was pushed back two months, moved outside and the class was split in half for two different ceremonies. - Colleen Harrison/Albert Lea Tribune 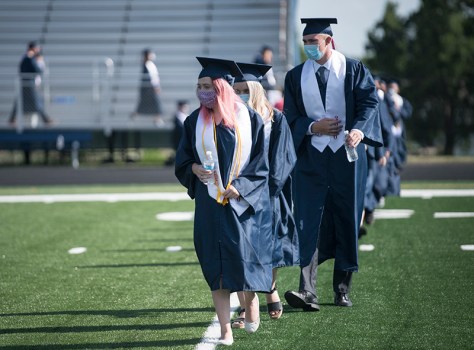 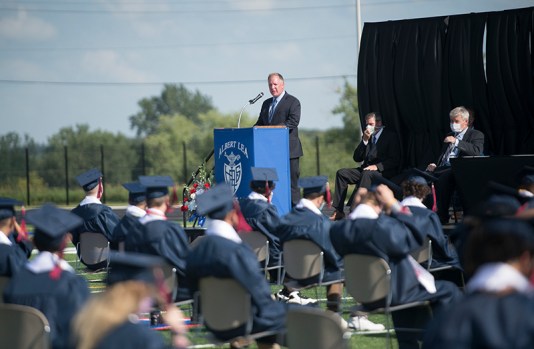 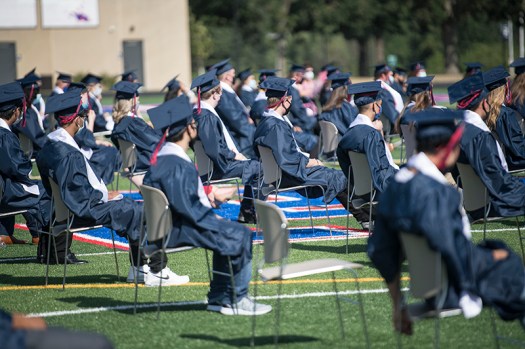 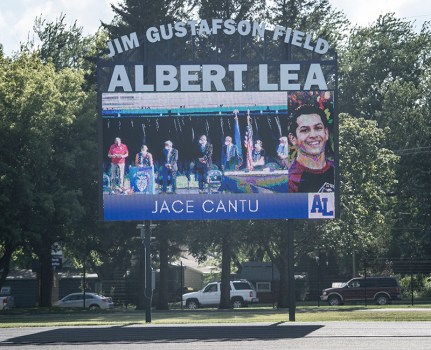 Video of the ceremony was played on the screen at Jim Gustafson Field inside Hammer Complex, as well as livestreamed online. Graduates' pictures were also shown as their names were called to receive their diplomas. - Colleen Harrison/Albert Lea Tribune 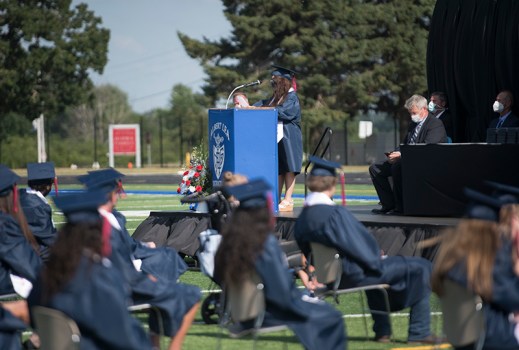 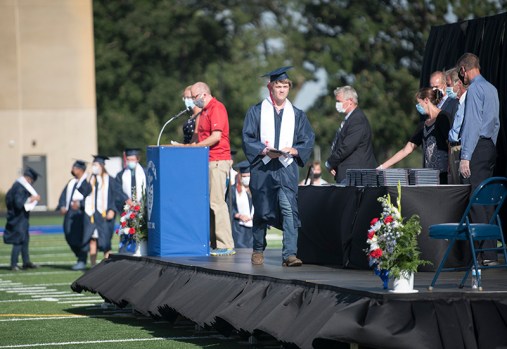 Students picked up their diplomas from a table as they walked across the stage during Friday's ceremonies. - Colleen Harrison/Albert Lea Tribune 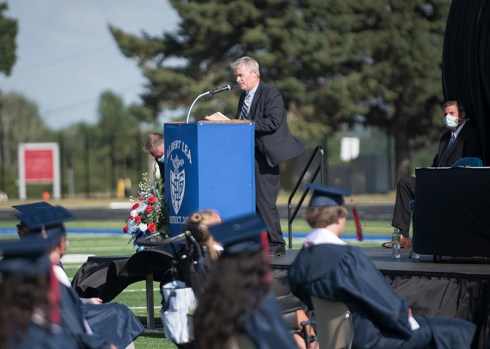 Albert Lea High School’s graduating seniors made history Friday night as they took part in the first commencement ceremonies ever on Jim Gustafson Field amid untraditional circumstances because of the COVID-19 pandemic.

Superintendent Mike Funk said the Albert Lea school district was the only district in the Big Nine to have an in-person graduation ceremony, though the senior class was divided into two groups to adhere to health guidelines in place by the state for the virus. In addition to having two ceremonies, administration, teachers, students and families were asked to wear face masks and sit socially distanced apart.

The commencement ceremonies gave families the opportunity to see the new Hammer Complex, which was made possible because of the community through the passage of a bond referendum.

“It is my hope this outdoor venue will host many graduations years in the future,” he said.

High School Principal Mark Grossklaus said this last chapter for the senior class has been “quite an adventure,” with students leaving for spring break in March, not returning to school, having to miss out on many key events of their senior year and then returning now two months later than normal for graduation. He remarked on the resiliency of the senior class.

School board member Kim Nelson, whose daughter graduated during the second ceremony, spoke of how many in the senior class have worked as essential workers during the pandemic, be it at grocery stores, nursing homes and other places, and all without reservation.

“While the community struggled to stay strong, we relied on you even more,” Nelson said.

She talked about some of the proud moments of the senior class, including “Freaky Friday,” powder puff, the boys’ and girls’ basketball teams, science fair and others.

“A new beginning is now in store for you, and you should enjoy every minute of it,” she said.

She encouraged graduates to embrace their plan for the next chapter, whether they will be in the workforce, in the military or attending college, and told the graduates to do what it takes to become the best version of themselves.

Funk, who noted he received his undergraduate degree in political science, said with the current state of the country right now being divided into two schools of thought with little room for gray area for those you disagree with, he hoped that the district taught students to learn both sides of an issue and to collaborate with others.

“The more you work together and problem-solve collectively, the more successful you will be,” he said.

He admonished the graduates to listen and learn from those around them.

Student speaker Alexis Zak, who moved to Albert Lea when she was 7, said that moving to the community has been the most life-changing event for her.

She said though the COVID-19 pandemic was challenging for the senior class, there were many positives that came out of the situation as well. She thanked the community who took efforts to recognize the seniors through efforts such as banners downtown, among others, and said it was a reminder that the community “had our backs.”

Graduates Kaylee Cincoski and Emma Johnson said they were glad to be able to graduate with at least half of their class in-person.

“I think it was super fun and I’m glad we were able to be recognized,” Cincoski said.

Students were able to walk across the stage as their names were read, though no one was able to shake hands.