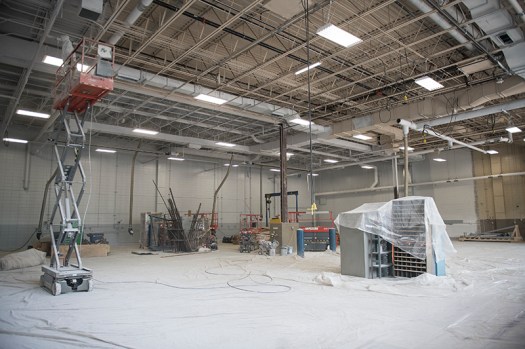 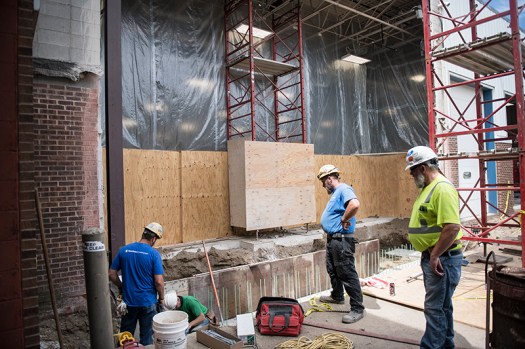 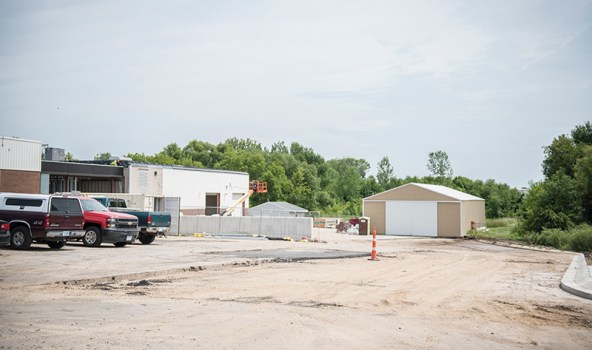 A more curved driveway will lead in to the back of the Albert Lea Riverland Community College campus so that semi trucks can pull in more easily for the school's truck program. - Colleen Harrison/Albert Lea Tribune 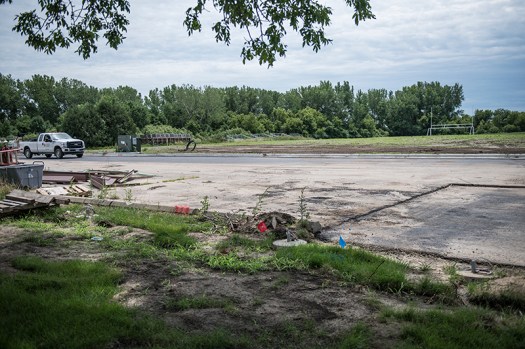 Riverland Community College's Gateway Building — which has been called outdated and was being used as makeshift space during the summer, has been demolished. - Colleen Harrison/Albert Lea Tribune

Crews are making steady progress on the construction at Albert Lea’s Riverland Community College campus, as students are expected to start fall classes in a little over a month.

The college broke ground at the end of September on the $10.12 million project that will add space, renovate existing classrooms and bring its transportation career fields under one roof.

Ryan Langemeier, dean of academic affairs, said the truck driving program will transition to the college in the fall with the completion of the project.

When finished, the campus will have a new truck driving range on the western part of the campus near the entrance off of Bridge Avenue, where students will be able to practice maneuvers, loading and unloading on docks, and other skills, he said. Three to four semis should be able to fit onto the range at a time, and the range is also outfit with lights for evening classes, as well.

“We’re really excited to have them come over,” Langemeier said of the truck driving students.

Other parts of the project include modernizing existing classroom and lab spaces, providing a new accessible rear entry, adding restrooms in the lower level and demolishing the former Gateway Building that had not been used for many years. The project also addresses deferred maintenance at the school.

Langemeier said in the space where the Gateway Building was located will be a space that some electrical outlets will be placed to plug in trailers for the college.

Additional improvements include waterproofing a portion of the building; adding three new auto lifts for the auto service program, new mechanical systems, a new electronic automation lab, student commons area and a flexible area for hands-on learning; and sealing and striping the parking lot. The diesel technology program is expanding to include ag diesel and more heavy equipment related to the agriculture and food industries.

“We’re really excited for the students to see the space,” Langemeier said.

Graphics will be added in a few locations in the renovated space that will bring in color and dimension into the space.

Langemeier said the project incorporated feedback from all levels, including students, staff and administration. Architects had meetings with students and faculty on plans to seek their opinions.

Riverland Community College President Adenuga Atewologun previously described the construction as “historic” for the college, noting the college had not seen construction of that scale in four decades. The project is being paid for in state bonding dollars awarded to the college.

“We’re really excited for when the students come back,” said Lindsey Johnson, project engineer with Knutson Construction, which is overseeing the project.

Langemeier said the college would like to have a public open house at some point in the future to showcase the improvements when they are complete, but when that will happen remains up in the air, depending on the COVID-19 pandemic.