Protecting those who protect the city 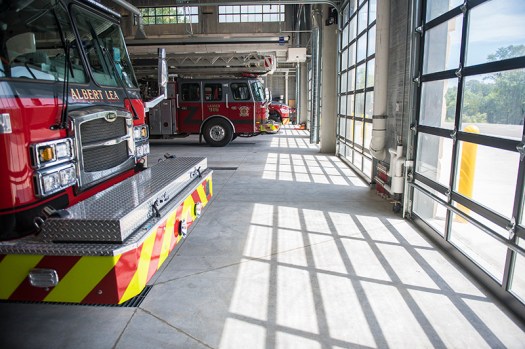 The Albert Lea Fire Department's new fire station can now house all of its equipment, which previously was stored at different locations in the city. - Colleen Harrison/Albert Lea Tribune 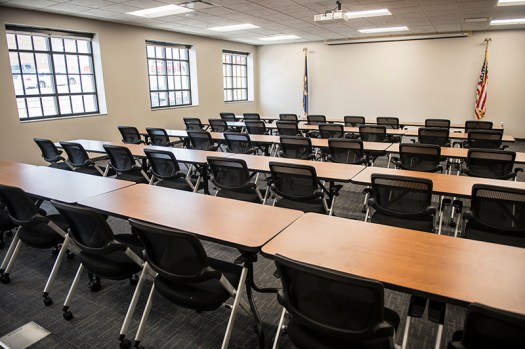 A meeting room in the fire station could potentially be rented out in the future for different training or meetings for community organizations. - Colleen Harrison/Albert Lea Tribune 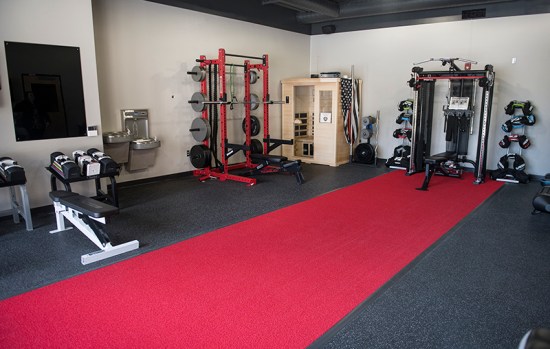 The fire station is equipped with a gym and also includes a sauna firefighters are expected to use to sweat out harmful toxins. - Colleen Harrison/Albert Lea Tribune 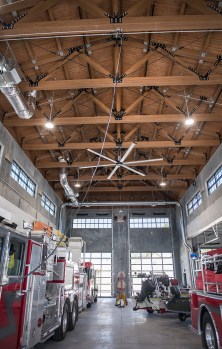 Part of the ceiling in the fire station's garage was constructed by Alamco Wood Products of Albert Lea. - Colleen Harrison/Albert Lea Tribune 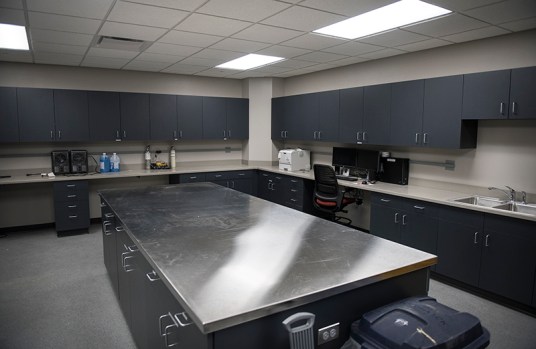 The fire station is divided into hot, warm and cold zones depending on the levels of contaminants present. This room, considered a warm zone, is used for repairing gear. - Colleen Harrison/Albert Lea Tribune 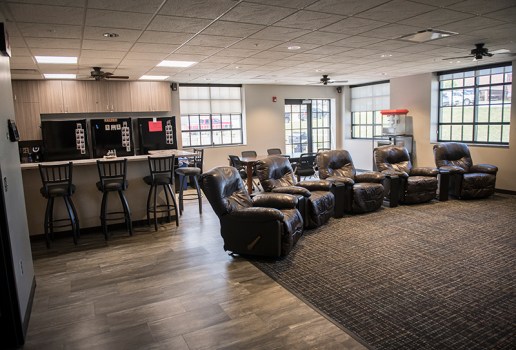 The second floor of the station has a living room, kitchen and bedrooms for when firefighters have the chance to rest. - Colleen Harrison/Albert Lea Tribune 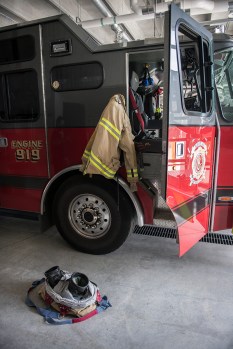 Firefighters leave their gear near the trucks while on shift so they're ready to go when calls come in. - Colleen Harrison/Albert lea Tribune 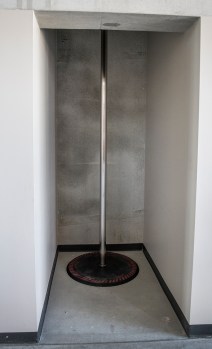 The pole from the former Albert Lea fire station was brought over to the new station. - Colleen Harrison/Albert Lea Tribune 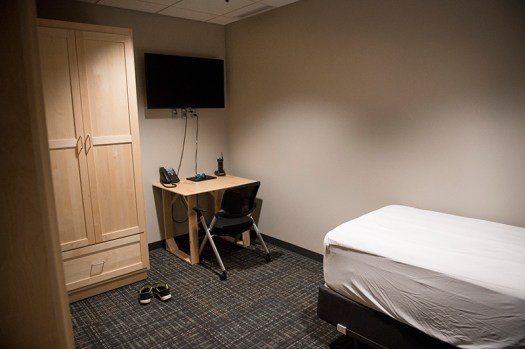 Each firefighter will be able to sleep in their own room when there's downtime on a shift, with separate shifts sharing the same rooms. The firefighters change out the bedding between shifts. - Colleen Harrison/Albert Lea Tribune 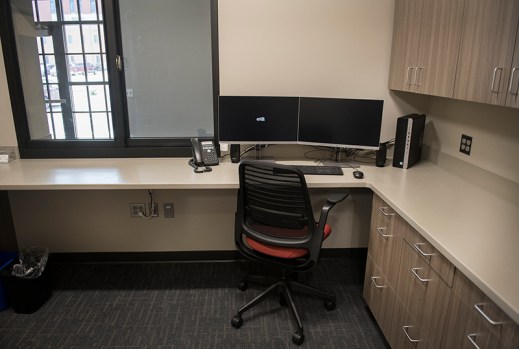 A receptionist's office is located near the front entrance of the fire station. The deputy fire chief and each of the captains have their own offices, and then there are two offices used during shifts — one for lieutenants and one for the on-shift firefighters. - Colleen Harrison/Albert Lea Tribune 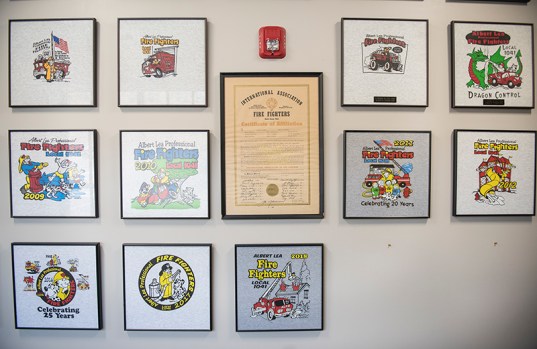 The different T-shirts designed through the department's annual fire education and T-shirt program it conducts will hang in the meeting room in the new fire station. - Colleen Harrison/Albert Lea Tribune

Albert Lea firefighters are settling into the new fire station off of Newton Avenue about three weeks after their first official day operating from the new site.

Though crews initially scheduled for the station to be complete in May, the project was finished at the end of July and is now starting to be showcased to various groups in the community.

Deputy Fire Chief Jeff Laskowske said firefighters have started tours of the new station for city employees, county leaders and the various county fire departments, and they are planning a two- to three-week stretch that members of the public can set up tours during September or October.

Laskowske said when the new fire station was designed and built, he made it a priority with Brunton Architects to focus on three key areas for his firefighters: mental wellness, heart health and cancer reduction.

“As a chief-level officer, my number one priority is my guys — my firefighters — my guys and gals that work for us. It’s making sure that we’re protecting them every day,” he said. “I can buy the biggest, fanciest tool or firetruck in the world, but if I don’t have the right people and protect the people behind it, that truck doesn’t do anything on a fire scene. The truck can’t drive itself there and fight the fire itself. I need people to facilitate everything.”

For the heart health component, that has meant implementing things such as a fitness center into the facility, where on-duty firefighters are required to workout for an hour a day. Firefighters can also workout there on their off days, along with the paid on-call staff.

For the mental wellness tier, that has included things like having separate living and office spaces, where the firefighters work on reports, compared to where they sleep or fix meals.

At the City Hall location, where the department had been housed since 1968, the offices and living space were all in one area. It was often challenging for one person to be finishing up a report, while the other firefighters were done for the day and cooking or otherwise socializing.

Laskowske and each of the officers now have their own offices, while the lieutenants share an office, and then all of the other firefighters share a separate office. With the firefighters divided into three shifts, each firefighter has computer access for typing reports as needed.

The new facility also has separate rooms with triple-pane glass on the windows for each of the firefighters to sleep in, instead of having all of the beds in one large room at the old station. Laskowske said this allows the firefighters to get better sleep in the stretches that they are able to get uninterrupted sleep.

For the cancer reduction component, the station is divided into hot, warm and cold zones with hot zones being where gear can be that has just been in a fire. The gear is put through an extractor right at the edge of the apparatus bay. Warm zones are where cleaned gear can be worked on or stored, and cold zones are the other spaces such as offices or living spaces.

The fire station also has a small sauna that firefighters are recommended to sit in for 15 minutes within 24 hours of a fire to pull remaining contaminants out of the skin.

Laskowske said he is excited at the recruitment capabilities the new station will provide, and noted he is looking for five paid on-call firefighters.

The station also allows the department to better incorporate the firefighters’ families, through things such as meals or movie nights.

Inside the front of the station is a large training room that Laskowske said will be used by the police and fire departments, but he hopes it will also be used for outside trainers to come into the city or for other community groups to utilize for things such as CPR training. It could fit up to 80.

The building itself cost a little over $8 million, and Laskowske said from the original bid to the final building, the project was only over by about $35,000. It was reduced in size from 33,000 square feet to 26,000 square feet by finding ways to multi-purpose space better.

The department found ways to reduce costs along the way, such as removing the awnings over the apparatus bays, resulting in a $35,000 savings; bringing the pole over from the old station, for a savings of $5,000 to $7,000; and cutting $5,000 to $7,000 in landscaping costs. They also saved money by not putting sheetrock up in one of the stairwells. Parks Superintendent Joe Grossman helped with landscaping recommendations, and other departments brought in expertise in other areas.

Laskowske said a bid to set up all of the technology in the training room was $58,000, but by utilizing Capt. Trevor DeRaad and senior firefighter Matt Levorson, who are trained in this area, they were able to instead pay the equivalent of $25,000 for the whole building.

DeRaad said a lot of the TVs and other technology used in the building they looked for during sales, such as on Black Friday, and the computers from the old station were brought over, as well.

Another large benefit to the new station is the large apparatus bay, which features wooden beams from Alamco Wood Products, that allows the department to house all of its trucks and equipment in one place, instead of having it stored at other locations throughout the city.

Laskowske said having everything in one space has already bettered the department’s response times.

“We have the ability to do so much more now,” DeRaad said.

The diesel trucks are hooked up to piping that pulls the exhaust fumes into a system instead of directly into the air.

Laskowske said the building is certified as a 100-year building and was paid for primarily through funds from the city’s police and fire pension account. Water and sewer funds were also used for those portions for the project.

The station is across Newton Avenue from the Freeborn County courthouse.

Look to the Tribune in the coming weeks for more information about setting up a tour.