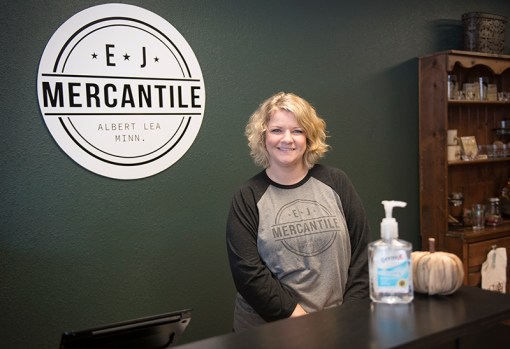 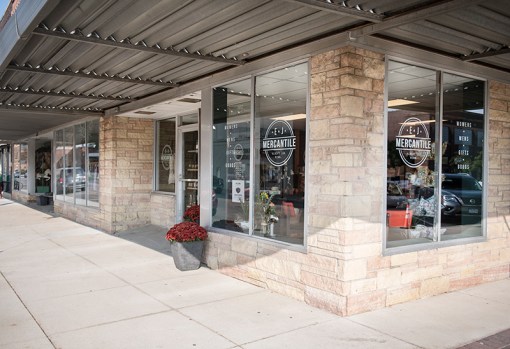 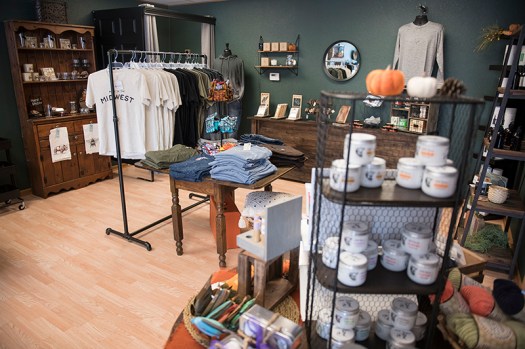 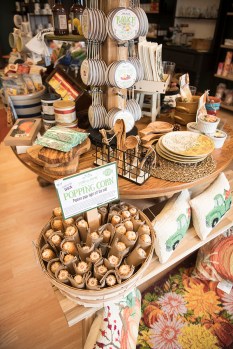 When Kellie Steele opened Ellen & Jane Boutique last year on Clark Street in Albert Lea, she offered a small section of gifts in the store in addition to all of the clothing and accessories available for her shoppers.

After her customers expressed to her that they wanted to have more of these types of items, she decided to move forward with opening a second shop called EJ’s Mercantile.

“It was more of a need to bring it to the community,” she said. “These kinds of places are just non-existent in this area.”

The store opened over the weekend at 102 W. Clark St., in what many know as the Unique building at the former location of the Albert Lea Convention and Visitors Bureau. In the 1940s through 1960s, it was home to Unique Cleaners.

Steele said when she was notified by CVB Executive Director Holly Karsjens that the CVB was moving from its former location to a space on Broadway, she jumped at the opportunity to be in the space and start her new business there.

She said she had been interested in the building for many years and decided to move forward with opening the shop there, which she describes as a “modern day general store.” She has been inspired by historical photos of downtown shopping in Albert Lea.

The shop has everything from gifts and goods to a small selection of clothing for both men and women.

With COVID-19, she said it has also been more pertinent for people to shop local and to not have to travel too far for shopping.

“We’re trying to hit every age bracket,” she said.

She said she had heard from several millennial-aged men who were looking for more clothing options in the community when they came into her Ellen & Jane Boutique with their girlfriends or wives, so the new store features some men’s and unisex clothing, along with men’s personal care items, such as hand soaps, lotions and shaving products.

There are also a few exclusive women’s clothing items not found at the boutique.

The store has a focus on entertaining with gifts that would be good for new homeowners or families. There’s also everything from dry soups, scones, drink mixes, teas and unique food items to chocolates from Willmar and all-natural seasonings. She noted she has tried to focus on Minnesota and Wisconsin vendors when possible.

She offers men’s and women’s masks, a candle line and cards and will soon offer grab-and-go sandwiches, salads, soups and drinks and is working with local food suppliers Peppered Cow in Albert Lea and Lacey’s Catering in Wells.

“I’m a big believer in retail and food needs to be downtown,” Steele said.

She started renovating the building at the beginning of August and had a busy 6 1/2 weeks preparing it for the opening.

She said she has been staying busy at the boutique and looks forward to seeing people in her new shop, as well. She invited people to give her feedback on the things they might want to see there.

“I’m excited and can’t wait to see what’s to come,” she said.