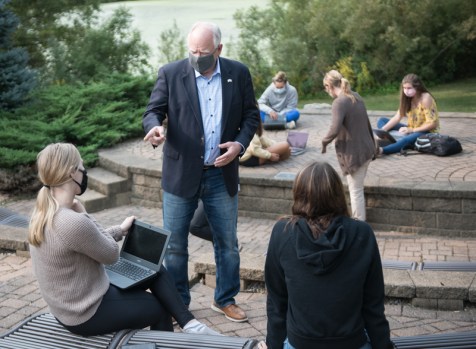 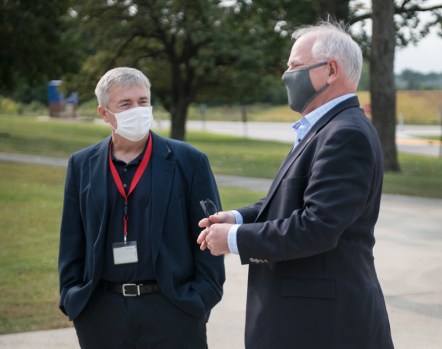 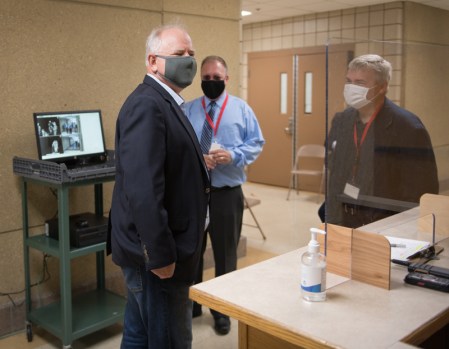 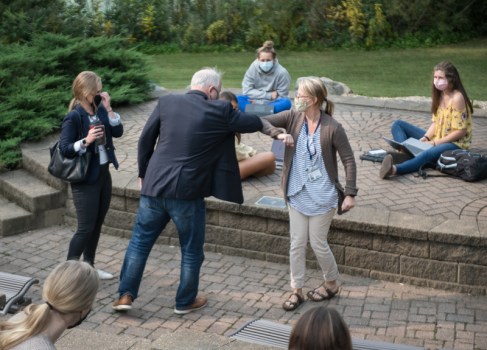 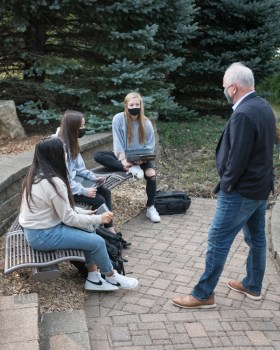 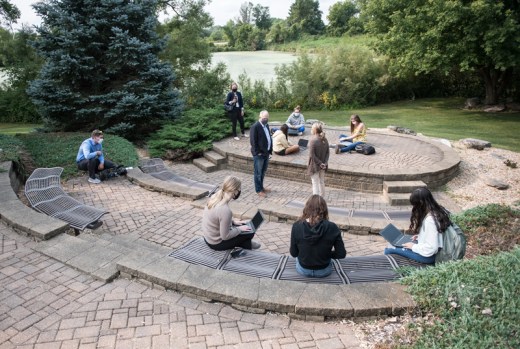 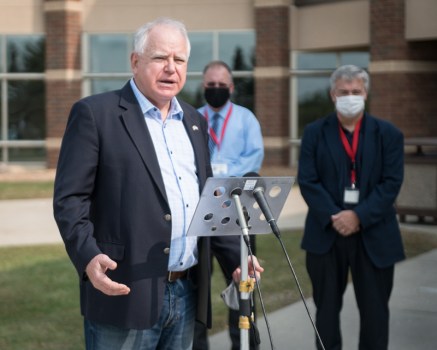 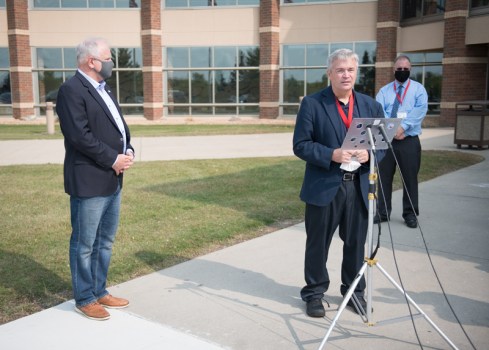 Minnesota Gov. Tim Walz visited Albert Lea High School on Wednesday as part of his statewide safe learning tour amid the COVID-19 pandemic. The governor was scheduled to then go to Byron Primary School to greet students as they boarded school buses. The two visits marked the sixth and seventh stops on the tour, led by Walz and Lt. Gov. Peggy Flanagan, respectively.

In Albert Lea, Walz met with Therese Netzer’s AP English class and Caylee Tennis’ physical education class — both of which were taking place outside — and checked out the high school’s thermal scanner as well. The governor highlighted the success he felt is taking place with Albert Lea’s hybrid learning model, with students splitting their time between in-person learning and distance learning — along with students having the option of only utilizing distance learning if that’s what makes them feel safest.

Albert Lea Area Schools Superintendent Mike Funk and Albert Lea High School Principal Mark Grossklaus led Walz through the different stops at the school, explaining to him the different measures they’ve implemented to keep students and staff safe. Funk said each school in the district has thermal scanners, which everyone walks through upon entering the buildings. If they show up hot on the scanner, they sit for five minutes to cool down, if possible, before walking through the scanner again. If they turn up hot again, they must then go to the school nurse to go through COVID-19 protocol. Funk said none of the students who have read hot on the thermal scanner have tested positive for coronavirus so far.

“It’s another layer of safety to help people feel secure,” Funk said to the governor.

While visiting with students, Walz asked them how they were doing with the school changes.

“If you’re sick of this, I’m right there with you,” Walz said to Tennis’ students. “… If we do this right, we’ll get done sooner.”

Walz — a geography teacher at Mankato West High School before his career in politics — called teaching a “noble profession,” and said he knows he has asked a lot by making teachers and school staff do something they’ve never had to do before and to constantly have to re-evaluate how they do it.

Walz said he was grateful to the community for keeping case numbers lower, and said that’s integral to keeping students in school.

“That social-emotional part of being in school — I say that as a teacher, I say that as a parent and certainly as governor — we know is critically important,” Walz said. “This is the way this is supposed to work. The virus will do what the virus does — while it is certainly predictable in some areas — not so much in the others.”

Walz said if they can track and keep transmission rates below 5% and community spread below 30%, there’s a better chance of keeping businesses open and expanding what people are able to do amid pandemic restrictions. He said the ideal transmission rate would be below 5%, and noticed places like New York City are pushing for 2% and below as a goal.

“(The administration has) executed the plan, the safe school reopenings, and put their own stamp on it here in Albert Lea,” he said. “In talking to teachers and students just casually, they feel protected, they feel valued and they’re back in school.”

“I just appreciate the governor coming down and drawing attention to what we’re doing here in Albert Lea,” Funk said. “… It’s great to be able to show him some of the great things that are going on, and our teachers and our students. We’re doing our best to keep people safe.”

Walz went on to say that Albert Lea is a great example of how that state wanted things to go: state leadership providing guidance and support and then letting local leadership implement their own plans for their communities and students. He said what is going on within Albert Lea schools is exactly what state leaders hoped for.

“The community’s getting this right, and we’re grateful,” Walz said.

When asked what he thought of the Big Ten Conference collectively deciding to change its mind and attempt to start its football season Oct. 24, Walz said he supported the decision, as he believes those making decisions concerning COVID-19 have to stay flexible. He said everyone knows a lot more about the virus now than people did in March, and that affects decision-making.

“I think (with) what the Big Ten knew at the time, they made the best-informed decision, and maybe it makes sense for them to look at that,” he said.

He said those in positions to make decisions need to be careful with planning — especially with schools and businesses — and that the lack of certainty with the coronavirus makes decisions all the more difficult.

Walz said he thinks the Minnesota State High School League will likely reassess its plans for fall sports as well, which he said he feels is appropriate. He said sports are a big part of social and emotional development and he realizes their importance.

“Thirty-five years of my life was spent either playing or coaching football, and it’s a huge part of who I am,” he said. “Nobody wants those kids back on the field Friday nights more than me, but I think the balance there is can we get them back there safely.”

He reminded people that just because football might restart — whether with the Big Ten or the Big Nine Conference — that doesn’t mean stands or stadiums are going to be packed with fans.

“I think it’s a correct thing to always be re-evaluating. I think with the decision by the Big Ten, it makes sense that Minnesota would be looking at this,” he said. “The folks who have been calling me, again, they know they have someone who gets football and what sports mean in school, but no matter how much I love that game, it’s got to be that proper balance so we’re not putting either those student-athletes or spectators at risk, and if we can do that, we should certainly be doing that.”