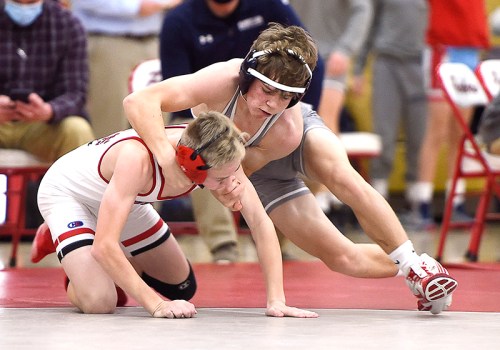 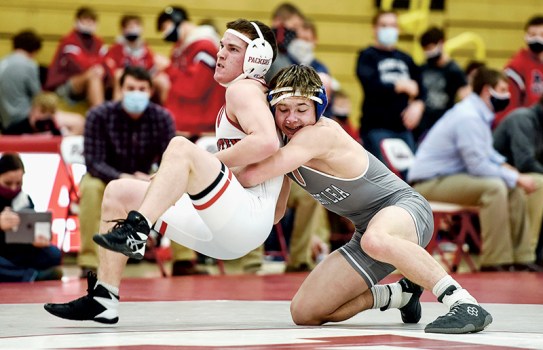 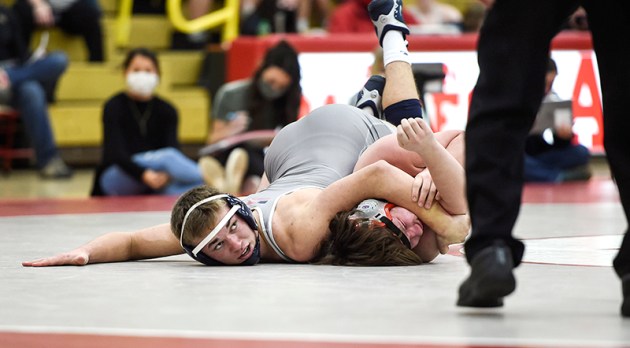 Albert Lea’s Luke Moller looks up at the referee as he tries he works to pin Austin’s Garrin Wilson during a triangular Friday night in Austin. Eric Johnson/Albert Lea Tribune 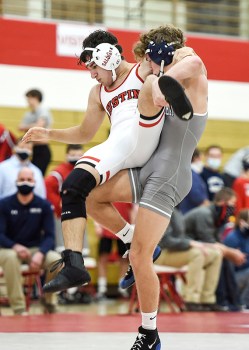 The Albert Lea wrestling team traveled to Austin Friday night, also taking on Rochester Mayo in the second triangular of the season.

Like the first triangular the Tigers split their two duals, easily taking care of the Packers 75-6, while falling to the Spartans 45-24.

The Tigers made quick work of the Packers, with all but one of the contested matches finishing with a pinfall. Eighth grader Logan Davis won at 106 pounds via a first-period pinfall and was followed by eighth graders Nick Korman and Brody Ignaszewski, sophomore Aivin Wasmoen and junior Carter Miller all winning by forfeit.

Junior Cameron Davis and eighth grader Triton Cox each won by second-period pinfall at 138 pounds and 145 pounds, respectively. Junior Colin Madson won the lone decision of the dual with a narrow 4-2 victory at 152 pounds.

Sophomore Luke Moller won in a second-period fall at 160 pounds before fellow sophomore Kadin Indrelie won via forfeit at 172 pounds.

Senior Caleb Talamantes picked up the final pinfall of the dual, winning at 182 pounds. Senior Trevor Ball and junior Carter Harmdierks won by forfeit at 195 pounds and 220 pounds, respectively.

Junior Caleb Banks fell victim to a pinfall in the first period of his match at 285 pounds.

Albert Lea got out to a solid start in the dual against Rochester Mayo, taking the first three matches. Freshman Michael Olson picked up a fall at 106 pounds and Korman notched another at 113 pounds. Ignaszewski won in a tight 5-4 decision with a takedown in the final period to put the Tigers up 15-0.

Wasmoen and Miller came up just short in their matches. Wasmoen lost in a 8-6 sudden-victory at 126 pounds and Miller lost an 8-3 decision at 132 pounds.

Cameron Davis got the Tigers back on track with yet another narrow decision victory, winning 5-4 after trailing in the final period. However, a tough stretch of losses for Albert Lea gave Mayo the points advantage and they never looked back.

Cox, Madson and Moller each lost by pinfall and Indrelie lost a 10-7 decision, giving the Packers a 27-18 lead. Talamnates notched his second fall of the night with a win at 182 pounds, but junior Adam Semple, Harmdierks and Banks each lost by fall in the final three matches of the night.

“The boys were a little bit flat and didn’t wrestle up to our standards,” said head coach Paul Durbahn. “We felt we left a lot of points on the board in the second dual and got out hustled by Mayo. We dropped a number of close matches and we need to start gritting out those close ones. When we do that, these duals will go the other way. It takes toughness.”

The Tigers move to 2-2 as a team this season and will be back in action Friday in a triangular in Northfield.