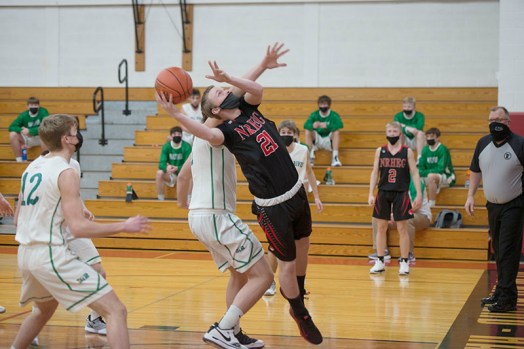 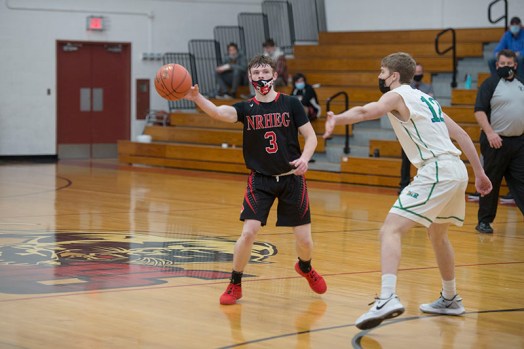 NRHEG freshman Daxter Lee passes the ball off to a teammate Saturday night at home. Lee led the panthers with 19 points, with a 7-0 solo-run to open the second half. Tyler Julson/Albert Lea Tribune 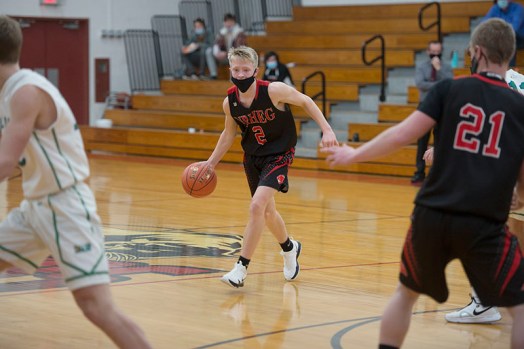 Junoir Porter Peterson dribbles at the top of the key Saturday against Maple River. Peterson had 13 points in the game. Tyler Julson/Albert Lea Tribune 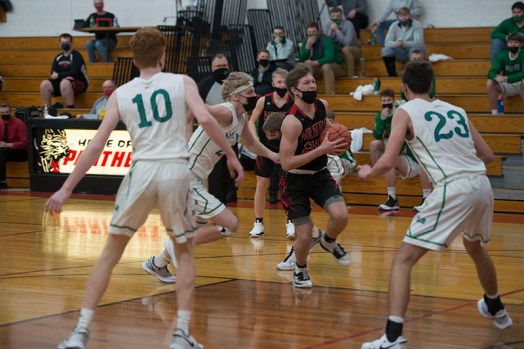 The NRHEG boys’ basketball team opened its season against Maple River Saturday night after having to move the game from Friday night due to inclement weather.

Despite a comeback after trailing by nearly 10 points in the first half, the Panthers were unable to hold onto a small second-half lead, falling to the Eagles 63-57.

It took awhile for the Panthers to get into a rhythm Saturday, not hitting their first field goal of the game until nearly five minutes into the game. Luckily for the Panthers, their defense kept them in the game not allowing the Eagles to extend too much of a lead.

NRHEG slowly started to gain some ground and soon found themselves trailing by just three points. The two teams traded baskets back-and-forth for the rest of the half and went into the locker rooms with Maple River only leading by five points, 29-24.

The scoring was fairly spread out by the Panthers in the first half. Junior Porter Peterson and freshman Daxter Lee were tied for the team-lead with five points each. Junior Ben Schoenrock had four, seniors Kordell Schlaak and Ashton Johnson each had three, and juniors Jaxon Beck and Jack Olson each had two.

After a quick basket by Beck in the second half, Lee took the game into his own hands and gave the Panthers a huge swing of momentum. Lee scored the next seven points for the Panthers, who now found themselves on top 33-30.

Again, the Panthers and the Eagles traded baskets and the lead numerous times over the next few possessions.

NRHEG took a timeout with 6:15 left to go in the game, which in turn shifted momentum in favor of Maple River as they went on an 11-4 run over the next four minutes to take a 58-47 lead with just under 2:30 remaining.

Peterson caught fire in the remaining two minutes of the game and single-handedly cut the lead to five points with eight points. However, the comeback would fall short as the Panthers took their first loss of the season.

Head coach Isaiah Lundberg said he was pleased with how his team played for the most part. Aside from fouling too much and allowing too many offensive rebounds, he said the defense played well.

“I thought we played extremely hard and did a lot of good things,” Lundberg said. “We made shots tough for them in the half court and did a nice job of rotating. Offensively, we looked good at times and others we just rushed things too much.”

Lee ended the game leading the Panthers with 19 points. Peterson was also in double figures with 13. Johnson and Schoenrock each had six, while Olson, Beck and Schlaak combined for 13.

The Panthers fall to 0-1 on the season and will be back on the court Tuesday when they host the Blue Jays of Waseca.