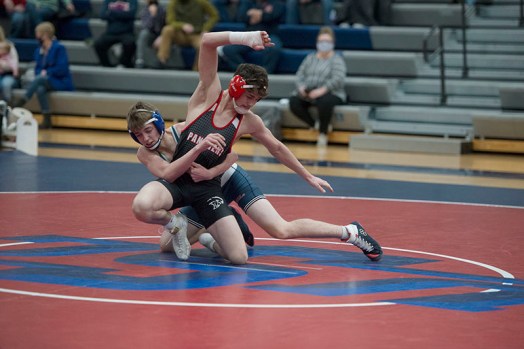 NRHEG's Nikolas Petsinger and United South Central's Ethan Evelbak squared off in one of the more competitive matches of the night. Evelbak came away with a narrow 5-4 decision victory. - Tyler Julson/Albert Lea Tribune 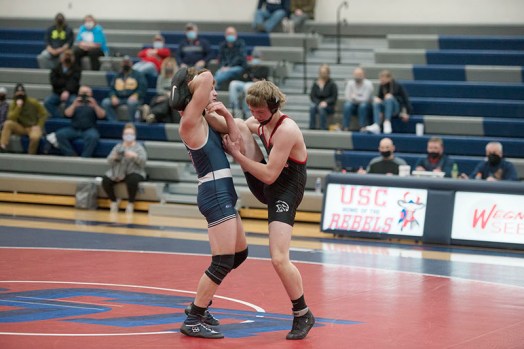 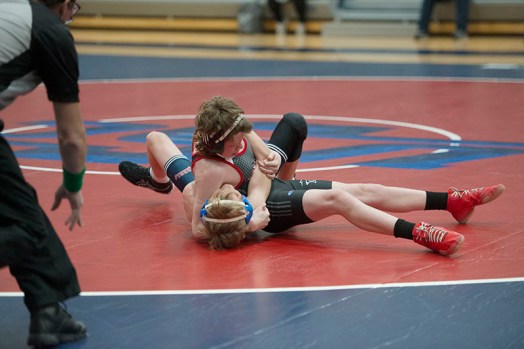 NRHEG's Seth Staloch puts United South Central's Kolt Bullerman on his back early in the first period of their match at 106 pounds. Bullerman ended up winning the match in a 14-0 major decision. Tyler Julson/Albert Lea Tribune

Despite picking up five forfeit victories, the Panthers dropped several key matches, allowing the Rebels to come away with the victory, 38-36.

In the first matchup of the night United South Central seventh grader Kolt Bullerman defeated NRHEG eighth grader Seth Staloch in a 14-0 major decision. NRHEG took the lead back in the next match by freshman Parker Bunn winning by forfeit.

United South Central then went on a four-match win streak to take a 25-6 lead.

No. 6 ranked 113-pounder Byron Getchell took on NRHEG freshman Annabelle Petsinger and came away with a first period pinfall.

The Panthers finally got some much-needed points at 145 pounds with sophomore Ethan Thompson winning by forfeit.

However, it was right back to the grind for the Rebels after that. Junior Konnor Harpestad and senior Micah Hamson notched wins at 152 and 160 pounds, respectively. Harpestad won in a fall over NRHEG seventh grader Deven Parpart, and Hamson won a 13-5 major decision over NRHEG junior Clay Stenzel.

With the score at 35-30 in favor of the Rebels with just two contests remaining, the Panthers needed a victory at 215 pounds to have a chance. United South Central junior Matt Beyer and NRHEG eighth grader Max Seltun battled to the end, but ultimately it was Beyer who came away with a 10-6 victory, and securing the Rebels the dual win.

NRHEG head coach Shawn Larson said the blame for the loss should fall on him.

“In the end I moved wrestlers around and we got beat twice in two matches I was taking a risk to try to win,” Larson said. “This loss lies squarely on my shoulders and we are going to start changing our approach right away at our next practice. Hopefully our wrestlers are looking forward to competing again.”

The Panthers fall to 0-2 to start the season and will wrestle again Monday night when they host Adrian Area and GMLOKS.

The Rebels climb to 4-1 on the season and will be back on the mat Thursday on the road against WEM/JWP.