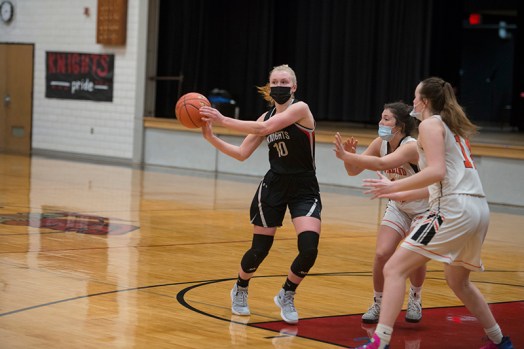 Alden-Conger/Glenville-Emmons senior Abbie Theusch passes the ball off to a teammate Thursday night at home. Theusch led the Knights with 12 points in the 60-26 loss to the Clippers. - Tyler Julson/Albert Lea Tribune 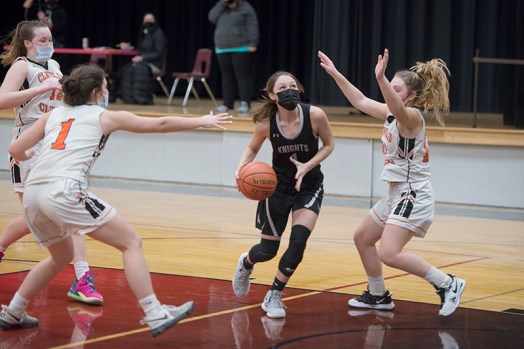 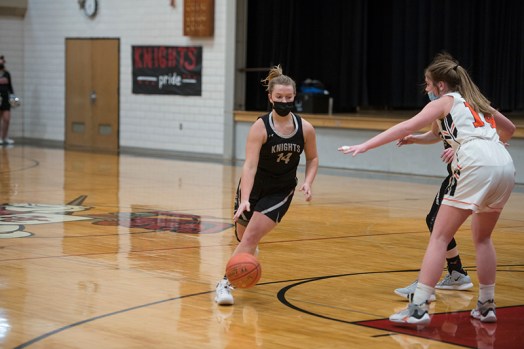 After a close loss Monday night, the Knights were unable to carry the same firepower into their game against the Clippers, struggling on both ends of the court and losing 60-26.

Both teams struggled on the offensive end early in the game with neither team finding the bottom of the net through the opening minutes. The Knights were the first team on the board, when senior Kylie Korman hit a three-point shot three minutes into gameplay.

The Clippers answered back with a 9-0 run, forcing the Knights to take a timeout nearly five minutes into the game. The short break only helped the Clippers as they went on to take a 15-3 lead before sophomore Lauren Heskett stopped the run with the Knight’s second three-pointer of the game.

Senior Abbie Theusch scored another quick basket for Alden-Conger/Glenville-Emmons and the Knights called their second timeout of the half with eight minutes left to play before halftime.

The Knights went scoreless for the next four minutes out of the timeout, while the Clippers added another seven points to their total and forcing another timeout by the Knights.

WIth 4:35 remaining in the half, the Knights found themselves down 26-8. Theusch put in another two baskets before the half, but Alden-Conger/Glenville-Emmons had a large hole to climb out of in the second half if they wanted to have any chance of a comeback.

Theusch led the Knights at halftime with six points, Heskett and Korman each had three. The Clippers went into the locker rooms with a 33-12 advantage.

It was much the same for the Knights in the second half, the Clippers opened the half on an 8-4 run. The Knights called a timeout just over five minutes into the half, down 41-16. Theusch continued to up her point total through the remainder of the game, but it was not enough to offset the Clippers, who ended the game on a 19-10 run.

Theusch led the Knights with 12 points. Junior Gracie Dhalum had four, and Heskett and Korman each had three. Sophomore Payton Sailor and junior Emma Lorenzen each had two.

The Knights fall to 0-5 on the season and will be back on the court Monday when they host the 1-4 Bulldogs of Janesville-Waldorf-Pemberton.