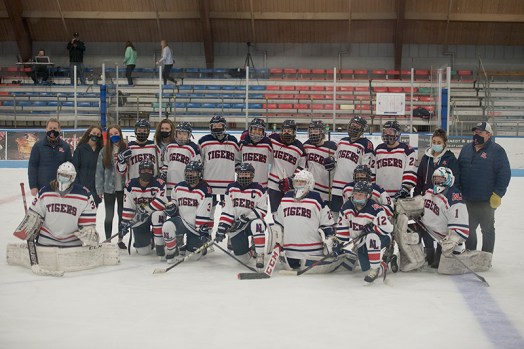 The Albert Lea girls’ hockey team finishes its season with an 11-7 record and a runner-up finish in the Section 1A tournament. The Tigers lost 3-2 to the Eagles in the section final. - Tyler Julson/Albert Lea Tribune 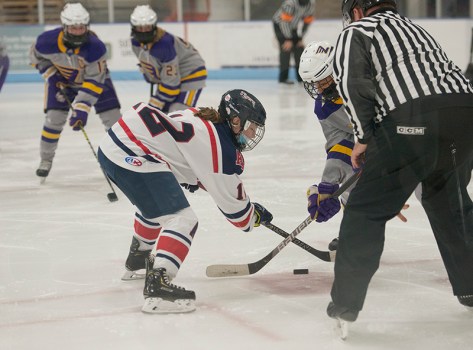 Senior Josie Venem faces off against a Rochester Lourdes opponent Friday night in the Section 1A championship game. 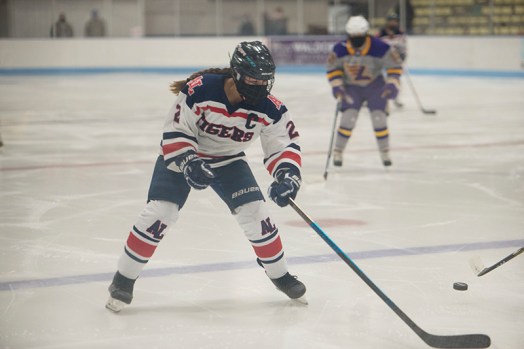 The Albert Lea girls’ hockey team entered the game against Rochester Lourdes Friday night with the goal of reaching their first ever state tournament birth in program history.

While the Tigers came up just shy of that mark, they still had plenty to hang their hats on after one of the best seasons of girls hockey in Albert Lea’s history.

Despite taking an early lead and then scoring the game-tying goal late in the third period, the Tigers were unable to top the Eagles, falling 3-2.

The Tigers were the first team to get on the board. Eighth grader Mika Cichosz scored the goal in the ninth minute of the period and was assisted by senior Alli Dulitz. Around three minutes later, however, Lourdes evened the game at 1-1 with their first goal of the game.

Neither team would score again through the remainder of the period. No penalties were called in the period on either team.

Senior Maddie Schneider started in goal for Albert Lea and saved eight of the night shots on goal by the Eagles. The Tigers tallied seven shots on goal in the period.

The Eagles came out in the second period and took the lead less than three minutes in. Eighth grader Lily Steven was called for a minor elbowing penalty about six minutes later, but the Eagles were unable to capitalize on the power play.

Lourdes and Albert Lea each recorded eight more shots on goal in the second period, with Schneider saving seven of them.

Up 2-1, the Eagles were called for three nearly consecutive penalties early in the third period. The Tigers came close to tying the game once again, but no shots found the back of the net.

The minutes started to tick away fast, and Albert Lea was running out of opportunities. Schneider was pulled to give Albert Lea an offensive number advantage, and it quickly paid off. With 44 seconds left in the game, senior Josie Venem found her shot and connected to tie the game 2-2. The shot was assisted by senior Ally Rasmussen.

Unfortunately for the Tigers, the Eagles were not ready to see overtime, scoring the game-winning goal with just eight seconds left on the clock.

The heartbreaking loss ends the Tigers season at 11-7, but caps off one of the most successful seasons in program history.

Albert Lea will lose six players to graduation, including Dulitz, Rasmussen, Schneider, Josie Venem, Jaiden Venem, and Taylor Stanek, all of whom played big roles in the success of the team. However, there are more than a handful of returning players who should make fans of the program excited for the future.