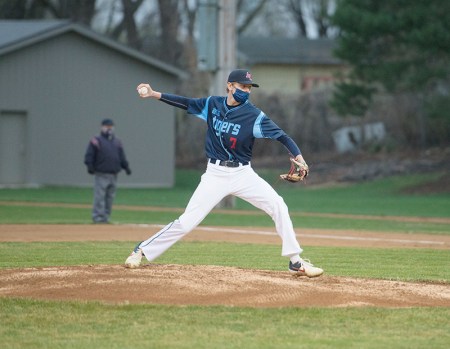 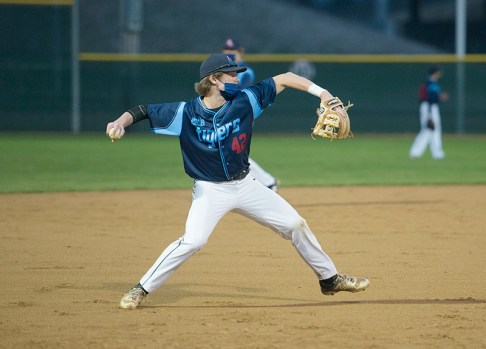 Senior Blake Ulve throws to first for an out Thursday night at home against Austin. Tyler Julson/Albert Lea Tribune 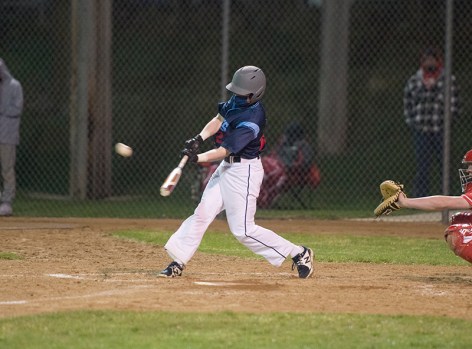 After a nearly two-year hiatus, high school baseball season was finally back in Minnesota, and Thursday night featured a prime Big Nine Conference matchup between Albert Lea and Austin.

After jumping out to an early lead, the Tigers were unable to hold onto their lead, eventually falling to the Packers in their season opener 3-1.

Senior Jack Jellinger started on the mound for the Tigers, picking up a strikeout in the very first at bat. After two more quick outs, it was Albert Lea’s turn at the plate.

Senior Caden Jensen got on board with a two-out single, and was followed by a single from fellow senior Blake Ulve. A walk by senior Cody Yokiel loaded the bases, however, a strikeout in the following at-bat ended the inning.

The Packers were again held scoreless in the second inning, and the Tigers capitalized by taking the lead. Junior Brennan Bakken led off the inning with a single and was followed by a walk from junior Carter Miller. Senior Trevor Ball was up two at-bats later and hit in Bakken with a sacrifice fly to center field. The Tigers took a 1-0 lead heading into the third inning.

Austin came base in the third inning and took the lead for themselves. A walk, groundout, walk, single sequence loaded the bases for the Packers with just one out on the board. The next hitter laid down a shot right up the middle of the infield. Junior Cam Davis stepped on second for one out and was a fraction of a second late on the throw to first that would have notched the double play and ended the inning. Instead, the runner was safe at first and two runs scored for Austin.

Now trailing 2-1, the Albert Lea offense lost some of its momentum in the following innings. After a one, two, three inning at the plate for the Tigers, Ulve was brought in to relieve Jellinger on the mound to begin the fourth.

Both teams went cold from the plate over the next few innings, with the only run being scored coming after a wild pitch in the top of the fifth.

Austin carried its lead all the way to the seventh inning, where Albert Lea gave its best effort at a rally. Davis, Jellinger and Jensen all recorded singles, but a double play and a groundout left two runners stranded on base and ended the game with the Tigers coming up just short.

Jellinger, Jensen and Bakken each recorded two hits in the game, while Ball hit the only RBI.

The Tigers fall to 0-1 this season and will be back on the field Saturday when they take on the Wingers of Red Wing on the road.