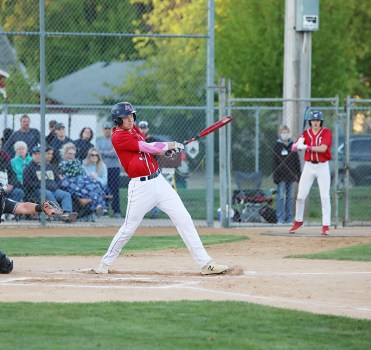 Trevor Ball watches the ball of the bat Thursday, going 1-2 at the plate. Kelly Hendrickson/For the Albert Lea Tribune 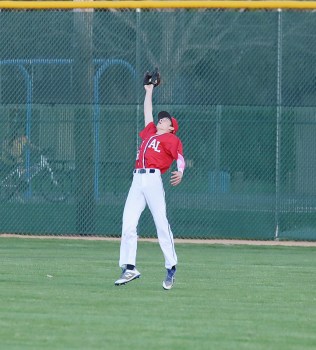 Brennan Bakken leaps to make the catch in the outfield Thursday night at home. Kelly Hendrickson/For the Albert Lea Tribune 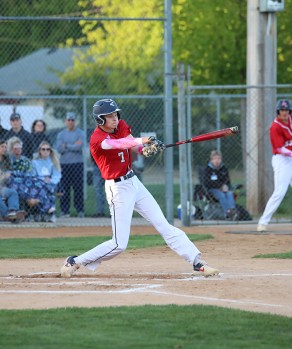 Senior Jack Jellinger takes a cut Thursday night against Mankato West. Jellinger was 0-3 at the plate with one walk. Kelly Hendrickson/For the Albert Lea Tribune 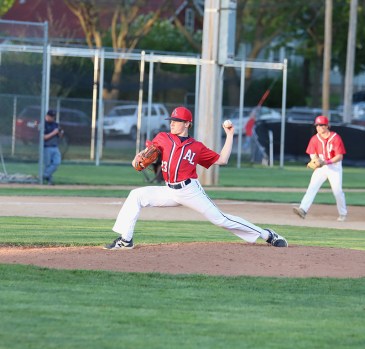 Carter Miller started on the mound for the Tigers. Miller pitched four innings, allowing six runs on 10 hits, while walking one and striking out three. Kelly Hendrickson/For the Albert Lea Tribune 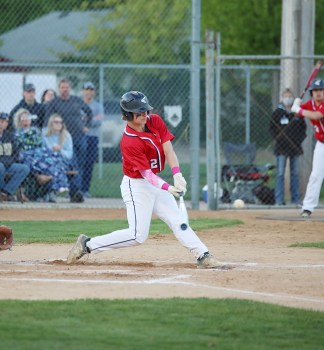 Albert Lea senior Blake Ulve swings at a low pitch Thursday night at home against Mankato West. Ulve was 1-3 at the plate with one RBI in the 9-2 loss. Kelly Hendrickson/For the Albert Lea Tribune

The Albert Lea baseball team entered its matchup against Mankato West Thursday night  riding a two-game winning streak and as winners of four of the last five games.

Unfortunately for the Tigers, they were unable to keep their streak alive after the Scarlets jumped out to an early lead and never looked back, winning 9-2.

The Scarlets got on the board right away in the first inning, using a single in the second at-bat, followed by a triple and another single to score the first two runs of the game. They added a third run two at-bats later with their fourth hit of the inning.

Three quick outs at the plate put the Tigers back out into the field, where they held the Scarlets scoreless after allowing two base runners.

Down 3-0 in the bottom of the second, Albert Lea cut into the lead when senior Trevor Ball hit a lead off single and was followed by a double by junior Henry Eggum. Trevor Ball was brought around to score in the next at-bat by senior Blake Ulve. Eggum was tagged out attempting to take third base.

The Tigers found their defensive stride in the top of the third inning, sitting down the first three batters that stepped up to the plate. However, the Scarlets matched that energy in the bottom half of the inning as junior Brennan Bakken was the lone player to reach base.

Now a 3-2 ballgame, the Scarlets pushed ahead with a three-run blast in the fifth inning.

The Tigers were never able to regain the momentum after that as the Scarlets tacked on another three in the sixth inning.

The Tigers fall to 8-5 after the loss and will be back on the diamond Saturday morning when they travel to Byron to take on the Bears.