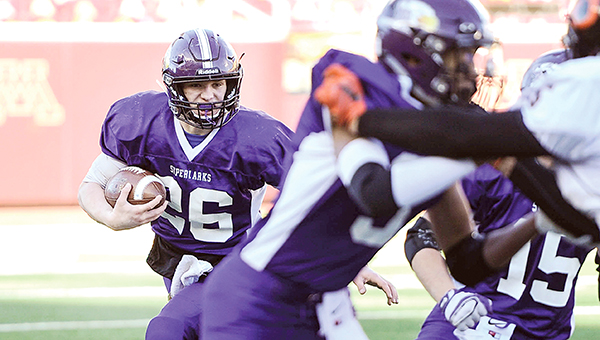 MINNEAPOLIS — To win big games, you have to make big plays, and the Superlarks delivered.

The Superlarks (14-0 overall) trailed the Rockets (13-1 overall) 20-14 halfway through the third quarter, but they came up with a bulk of big plays to respond and take over the game.

Connor Hartson hauled in a 17-yard catch on fourth-and-6 to set up a 10-yard touchdown run by Zach Myhre that made it 21-20 Grand Meadow with 50 seconds left. After the Larks forced a three-and-out, Grand Meadow quarterback Michael Stejskal led Grand Meadow on the biggest drive of his football career.

“Our offensive linemen showed up in that last drive,” Stejskal said. “I think that we knew we needed to get that one last touchdown to separate us to eight points. Everyone had the drive to do well and we made plays.”

Stejskal scrambled on the final play of that drive and he was able to find Rieken with a strike over the top. Rieken hauled in the catch in the back of the end zone as he was hit by a defender.

Although the Larks hadn’t run that particular play to Rieken all season long, they knew how to execute it when it counted.

“The play’s pretty much designed to go to me,” Rieken said. “When I ran out there I knew I was open and I knew Mike would make a good throw. It was just up to me to make the play. It’s like nothing you’ve ever felt before, catching the pretty much game winning touchdown. I don’t know how to explain it.”

Rieken also had a big impact on the defensive side of the ball as he racked up seven tackles, while forcing and recovering a fumble, and picking off a pass near the end of the first half.

“I was pretty motivated. No matter what this was our last game,” said Rieken, a senior. “You’d rather end on a win than on a loss.”

Stejskal finished his Grand Meadow career in style when he broke free for a 79-yard touchdown run to put the game away with 2:14 left in the contest. He finished with 218 yards passing with three touchdowns and an interception and 110 yards rushing and a touchdown.

“Stejskal’s been the biggest leader on the team. He’s been carrying us the whole way and he’s just been a real good teammate,” Grand Meadow senior Micahel Oehlke said.

Grand Meadow now has the longest active winning streak in Minnesota prep football with 36 straight wins, and it has played in the state title game four years in a row. Grand Meadow head coach Gary Sloan was able to win the last three state titles with his son, Tyler, at his side in a coaching role and his son, Trevor, on the field as a lineman.

Grand Meadow also had to battle multiple injuries this season as 11 players missed at least one game and standout junior Blake Benson missed the majority of the season with a knee injury.

“I’m very proud of the way these guys battled all day long and all season long,” Sloan said. “Underwood is a very, very physical team and I like the way they run the ball. They block hard, they tackle hard and they do things the right way. I have a lot of respect for their program. I know they can’t be big fans of Grand Meadow because we’ve had some great games in the last three years.” 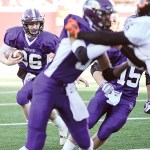 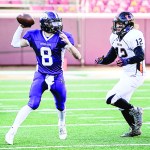 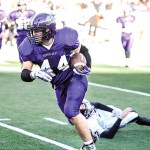