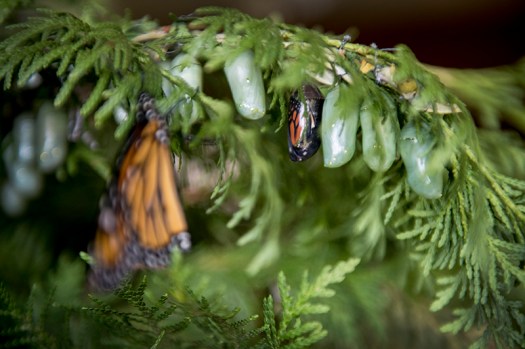 Chrysalids in different stages hang from a plant in Tammy Solomonson's home while a freshly-emerged monarch butterfly hangs to dry and expand its wings before being released. - Colleen Harrison/Albert Lea Tribune 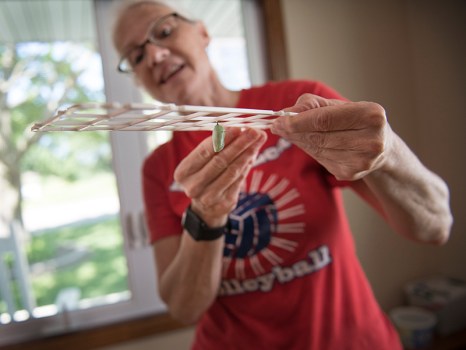 Robin Hundley holds up a lone chrysalis hanging from a tray she uses in her monarch rearing. - Colleen Harrison/Albert Lea Tribune 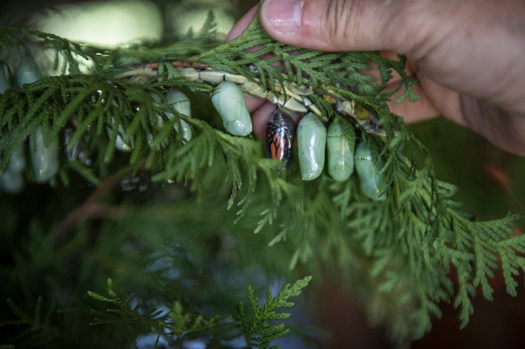 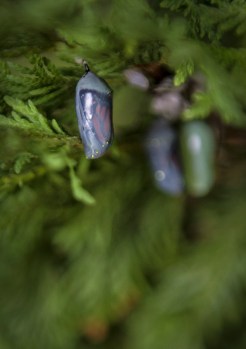 The orange and black of a monarch's wings can be seen as a chrysalis transforms and the butterfly comes closer to emerging. - Colleen Harrison/Albert Lea Tribune 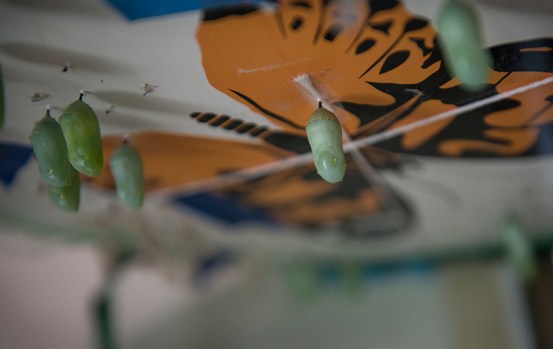 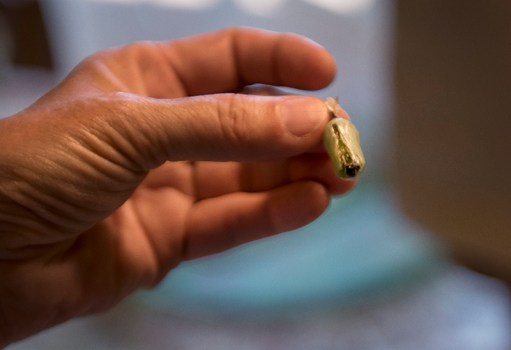 Solomonson points out a chrysalis that likely won't make it as a fly got to it, but that she will hang on to to make sure. - Colleen Harrison/Albert Lea Tribune 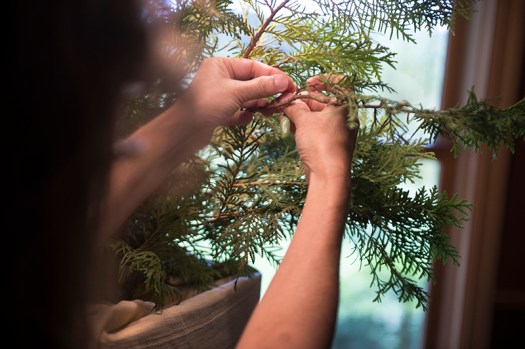 Solomonson moves her chrysalids to a houseplant using fishing line to attach them to the branches, which she said are easy for the butterflies to grip and hang from when they emerge. - Colleen Harrison/Albert Lea Tribune 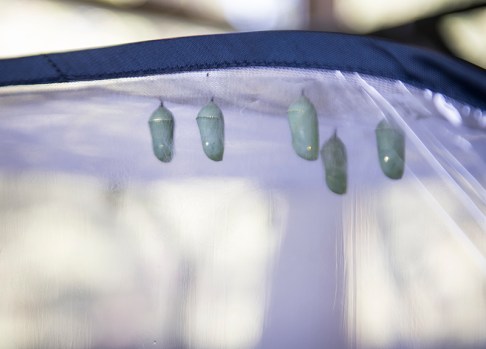 Chrysalids hang from an encasement in Solomonson's home. She will eventually move the chrysalids onto a plant. - Colleen Harrison/Albert Lea Tribune 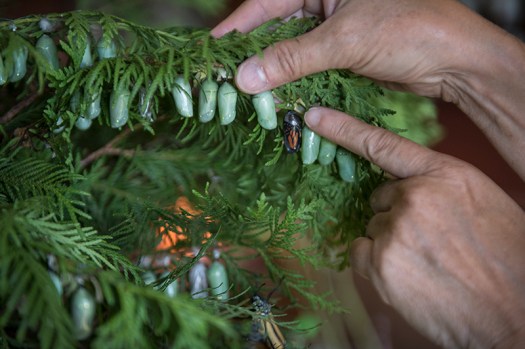 Monarch chrysalis stage a metaphor for humans as well

Editor’s note: This is the third in a four-part series. Pieces will be published on the third Saturday of each month.

On Monday, Robin Hundley drove to work with 17 tiny lives hanging from a piece of circular board secured by her glove box.

It is a short drive — less than a mile — from her home to her work at Southwest Middle School, where she watches more than her soon-to-be butterflies (then nestled safely in their pale green chrysalids) grow wings.

Hundley was preparing for Thursday’s open house at Southwest. That day, sixth graders poked their heads through the door in succession, shuffling in and out after listening to their math teacher explain the materials they needed for class (a 1-inch binder).

On the table opposite the door, 17 extra classmates hang suspended from their cremasters, surrounded by green mesh and stitched to their own vision board: the disc decorated with a detailed print of a monarch butterfly.

Next to them, a monarch-decorated poster quotes William Shakespeare: “We know what we are … but not what we may be.”

“It’s at the beginning of the school year, when everybody’s nervous about coming to school, and it’s just one of those things that, it just creates safety and community,” Hundley said. “Everybody loves butterflies.”

Two weeks after they hatch and after they multiply their body size several times over through ravenous consumption of milkweed plants, leaf by leaf, the black, green and yellow-striped monarch larvae decide it is time to climb.

Inside the 3-foot-tall mesh and plastic habitat in Tammy Solomonson’s bedroom, the caterpillars leave silken trails behind as they trudge up the clear plastic sides. At the top, they form that silk into home base for their personal transformation. Then, one leg at a time, they let go. After the final leg, they swing into a J shape, hanging from their backsides.

The next step is a bit like watching an alien, Hundley said. The caterpillar’s rubbery skin begins to split at its head, and the caterpillar wiggles violently, splitting its skin further and pushing that shed up to the meeting point between the caterpillar and the surface it hangs from with its cremaster — a small black stump that hooks into its silk pad for security. Beneath that skin is a rough, but soft chrysalis.

It does not spin a cocoon, Hundley said. It is the cocoon.

“It sheds its skin, and that’s what’s inside,” Hundley said.

When Solomonson holds a light up to a chrysalis, it is translucent, “like a gel soup,” she said.

Last week, she had close to 100 servings of gel soup hanging from the cuttings of bristly, evergreen-like arborvitae on her dining room table. She hangs them there so the butterflies have something easy to grip onto when they climb out of their chrysalis after 14 days. When the butterflies emerge, they drip a few rusty-brown drops of fluid as they dry out. Rehanging them, using their strong silk pads as anchors, means that fluid does not drip down onto the milkweed of feeding caterpillars below, Solomonson said.

The leaves also provide Solomonson, an avid photographer of the whole life cycle, a pleasing backdrop for her images, she said.

Hundley’s chrysalides — which typically take a steady 10 days to emerge — do not get rehung.

“I’m not a delicate person, and I’m afraid I’m gonna crush them,” she said.

It takes the chrysalis a relatively short time to streamline, trimming down the lumpier bits into a smooth, tapered, 2-inch-long cylinder. A close look reveals the outline of a wing — like a mold or a cast — on the chrysalis’s side. Three-quarters of the way up, at the bulkiest point of the chrysalis, a thin black horizontal circle is paired with a crown: an iridescent, gold-tinged line, like precision work done with a microscopic tube of glitter glue.

“There just really isn’t anything more ornate that I know of than a monarch chrysalis,” Solomonson said.

To Solomonson, the chrysalis is the most mysterious part of the process.

“It’s such a big change,” Hundley said. “You can’t believe inside that tiny little thing is a butterfly.”

A day before the butterfly emerges, like clockwork, the chrysalis will change again. The veil is lifted, and the chrysalis becomes clear. Inside is the fuzzy black thorax and abdomen and the hint of vibrant orange wings, as if the butterfly is vacuum-sealed inside. Typically, the caterpillars emerge in the late morning. Because of this timing, Hundley said her second-hour class tends to consider itself the favorite.

To emerge from the cocoon takes seconds.

“You walk away and you come back, and they’ve popped out,” Solomonson said.

That moment — when the butterfly steps out of its chrysalis for the first time — is why Solomonson keeps raising butterflies, she said.

“The transformation from this worm into a beautiful butterfly … it was just so beautiful,” she said.

Right from the beginning, the caterpillars have the potential of a butterfly inside them. According to the Monarch Joint Venture — a partnership of several agencies, organizations and programs teamed up to protect the U.S. monarch migration — many of the adult features of a monarch actually begin developing in the larval or caterpillar state. A caterpillar contains tiny cell clusters, called imaginal disks, which eventually develop into their butterfly body parts. When the larva enters its pupal stage — the chrysalis — the imaginal disks get to work, moving the developing butterfly features from the inside of the body to the outside.

“(It’s) kinda almost like it dies inside and then all these new parts come to life,” Solomonson said.

Inside the chrysalis, the monarchs are destroyed and rebuilt from a whole new foundation — something they have carried with them all their lives, Solomonson said. She said she spends a lot of time staring. Waiting.

“I guess we all have that potential for transformation, you know?” Solomonson said.

Solomonson, who met Hundley at The Vineyard Church, calls the monarch’s transformation “miraculous.” She said she sees many spiritual lessons brought to life by the monarch’s life cycle.

The chrysalis is the crux of many of these analogies.

She calls the moment the caterpillar drops its last leg to swing into a J-hang the “leap of faith.”

“Faith is like that, where we’re trying to believe and we think it’s just supposed to be this one-step, ‘We believe’ process,” Solomonson said. “But sometimes it’s just … letting go one leg at a time until you’ve got one leg left, and you drop and you just let go.”

The caterpillar can do this, she said, because it has confidence in what it is hooked into. It reminds her of Paul’s teachings in the Christian gospels.

“Set your minds on things above, not on earthly things,” Colossians 3:2 reads. “For you died, and your life is now hidden with Christ in God.”

Judging by all the wiggling, it is not always an easy transition.

“There just comes this point where you gotta die,” Solomonson said.

And in that dying — not always a physical death, but perhaps a lifestyle — comes the transformation. The deconstruction of a chrysalis is a metaphor for resting in God’s care during a work you cannot do on your own, she said.

“Sometimes, transformation is just something that you have to let God do,” she said.

She calls the shell of the chrysalis left behind by the transformed monarch “the empty tomb.”

Solomonson said she thinks of humans and their life on earth as the caterpillar stage. We are consumers, she said, looking to survive. But butterflies, especially the fourth generation of the season that makes its 3,000-mile migration to Mexico, are a picture of eternal life.

“That last generation lives way longer than all of the others prior to them,” Solomonson said.

Like the changing of the skin — which caterpillars do several times before their final split into a chrysalis — humans, too, have processes where we have to grow and change, she said. But that final change is the big moment.

“The skin comes off,” Solomonson said. “We’re done with that. It’s new life.”

A good picture of metamorphosis

For Hundley, those transformations will occur in the life cycle of the sixth grader she helps to read her first Southwest Middle School schedule Thursday morning.

“It’s just a good picture of a metamorphosis — how you change,” Hundley said.

In her class, she uses a short story shared widely. The version Hundley uses is titled “Struggle.” In it, an emperor moth’s wings cannot expand because a man tries to help it do something it needs to do on its own: squeeze blood from its abdomen and pump that blood into the wings.

“I can’t help you out of the cocoon,” Hundley said she tells her students. “Struggle is real, and you have to, in order to fly, you’ve got to get through the struggle.”

“We kind of feel like caterpillars, but there’s a little butterfly inside all of us,” Hundley said.

On Monday, Hundley will have a new flock of sixth-grade caterpillars armed with 1-inch binders at school.

“You’d think you’re gonna get tired of watching a caterpillar turn into a chrysalis and a chrysalis hatching, you’re like, you’d think you get bored with it,” Hundley said. “… Every time one hatches, I go, ‘That’s amazing. That is amazing.’ I just love it.”