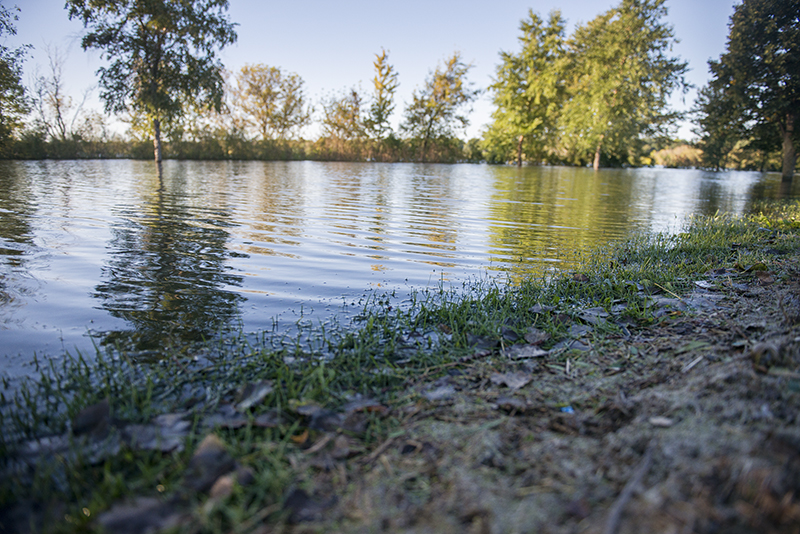 Albert Lea Lake water levels remain high, and the area of land between Front Street and the lake near the Blazing Star Trail is still flooded. Colleen Harrison/Albert Lea Tribune

Preliminary infrastructure damages tied to last week’s floods are estimated at more than $1 million in Freeborn County, according to officials.

Kluever said more than 160 residential properties have property damage in the county as of this morning.

Albert Lea city councilors discussed severe flooding the city has faced in the last week during its council meeting Monday.

Second Ward Councilor Larry Baker said he spent 2 1/2 hours Friday in his ward speaking with residents about the flooding.

“I just hope that everyone is doing well,” he said.

Baker advised anyone who needs help with cleaning up from flooding to give him a call.

“The only roads that remain closed are East Main Street, Lincoln Avenue north of West Ninth Street and the Pearl Street and Elizabeth Street intersection,” the release stated.

All bypass pumps had been shut off Monday morning, but two pumps were still running on full.

“The city expects this to continue until the water levels on Albert Lea Lake decrease,” the release stated.

Jerad Stricker, conservation technician with the Shell Rock River Watershed District, said Albert Lea Lake and Shell Rock River were at their peaks. He estimated it would take a few weeks for the lake and the river to go down.

He measures water levels at three stations on the Shell Rock River and expected to have more details about those levels in the next few days. The Shell Rock River travels south of Albert Lea through Glenville, west of Gordonsville and through the Northwood area. It connects with the Cedar River.

Albert Lea Mayor Vern Rasmussen Jr. said the flooding he has seen in the community has abnormal.

“It has a lot to do with the fact that we have had a lot of rain prior, and the ground was saturated, and as a result there was nowhere for the rain to go,” he said.

First Ward Councilor John Schulte V said though flooding has enveloped the city since Thursday, he has not seen extensive flooding in his district, which encompasses the northwest side of Albert Lea.

“I haven’t seen it as high as it’s been,” he said.“Fortunately we don’t get 5 inches of rain in eight hours too often. That is the problem. Anytime you get that concentration of rain, there is not much you can do about it.”

Anyone with property damage related to flooding is advised to call 1-800-543-7709 and provide your name, address, phone number, number of occupants in the home, what was damaged and the approximate value of the damage.