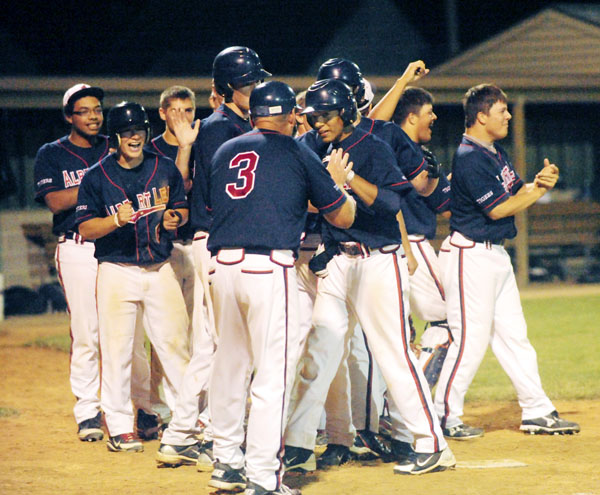 The Albert Lea Post 56 Legion baseball team hosted the District 1 Tournament in July for the first time in 20 years.

The Tigers made the most of its home-field advantage.

Top-seeded Albert Lea defeated Winona in the opening round and the Rochester Red Hawks in the semifinals and finals en route to its first Minnesota Legion State Tournament appearance in more than 30 years.

The Tigers’ district-championship run was led by sophomore Ethan Abben. The team’s shortstop and leadoff batter had a .370 batting average with five doubles and eight RBIs over the tournament’s five games. He was also 4-for-5 with three doubles and six RBIs in the title game.

While Abben was the Tigers’ top player throughout the tournament, sophomore Makael Lunning had the most dramatic performance.

With two runners on base and two outs in the eighth inning, and Albert Lea clinging to an 8-7 lead against Winona in the quarterfinals, Lunning blasted a three-run homer over the right-field fence. Lunning was mobbed at home plate after sealing the Tigers’ 13-7 win and breaking out of an 0-for-7 slump.

In the tournament’s championship game, the Tigers trailed the Red Hawks 3-2 entering the seventh but scored 14 runs over the final three innings to rout Rochester 16-5.

Tyler Woodside earned the win for the Tigers after pitching seven innings and allowing one earned run on seven hits with four walks and five strikeouts.

Aaron Klatt opened the state tournament, held at Round Lake Stadium Field in Eden Prairie, with complete game for Albert Lea in a 5-2 win over Lakeville North.

Klatt allowed four hits, struck out six batters and walked five, and Abben went 2-for-4 with a triple and two RBIs.

The Tigers lost 13-1 to eventual state champion Eden Praire in the second round and were eliminated by Hopkins 3-2 in the loser’s bracket the following day.

Trailing 3-2 in the top of the ninth inning with one out, Cody Haaland, J.T. Bellrichard and Woodside each singled to load the bases.

With the tying run at third and go-ahead run at second, Lunning struck out and Dylan See-Rockers grounded out to third base to end the Tigers’ season.

Albert Lea’s coach, Jack Kortan, said following the game: “We had some good at-bats there at the end — it’s just a tough way to lose. We had our chances.”