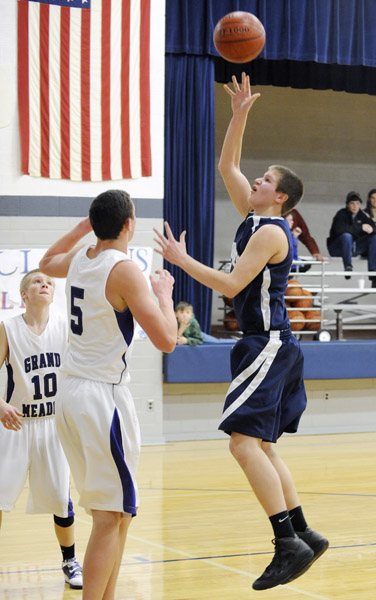 Glenville-Emmons’ Andrew Lau shoots a hook shot against Grand Meadow earlier this season. Lau is averaging 22 points per game after starting the season on the bench. -- Andrew Dyrdal/Albert Lea Tribune

Glenville-Emmons boys’ basketball was one of the most electric teams in the area last season as they averaged more than 65 points per game and won the program’s first Southeast Conference title.

The Wolverines, which also owned a top-six scoring defense in Class A, began the 2010-11 season 14-0 and packed its gym with fans as it went on to finish 23-5 and 16-2 in the SEC. Glenville-Emmons earned the No. 2 seed in Section 1A West and beat Medford and Bethlehem Academy en route to the subsection finals, but lost to top-seeded Goodhue 55-46.

The Wolverines accomplished most of this without its starting point guard and reigning Team MVP, Peter Hansen. The senior broke his ankle four games into the season and didn’t return until late in the team’s schedule.

Without its go-to player, another Wolverine rose to the occasion.

Glenville-Emmons’ senior forward, Andrew Lau, was named the Tribune’s All-Area Player of the Year after averaging 21.9 points and 11.5 rebounds per game. He also scored a career-high 43 points on Jan. 14 against Immaunuel Lutheran.

Senior Tyler Woodside also contributed to the historic season. The forward averaged 11.5 points and 8.5 rebounds per game, and led the SEC with 55 blocks.

The Wolverines’ swept the postseason honors when its coach, Dan Fredrickson, was named All-Area Coach of the Year.

Glenville-Emmons’ quest for a perfect conference season was disrupted when the Wolverines were stunned by Hope Lutheran 40-37 on Jan. 28. The team had won its previous 14 games to start the season and beat Hope Lutheran by 44 points in their first meeting.

“It was a shocking loss,” Fredrickson said following the game.

The Wolverines went 7-3 over its final 10 games, including losses to Lake Mills, Lanesboro and Norwood-Young America. The team’s 16-2 conference record was just enough to outlast Spring Grove, who finished 15-3, and Houston and Lanesboro, who each finished 14-4 in the top-heavy SEC.